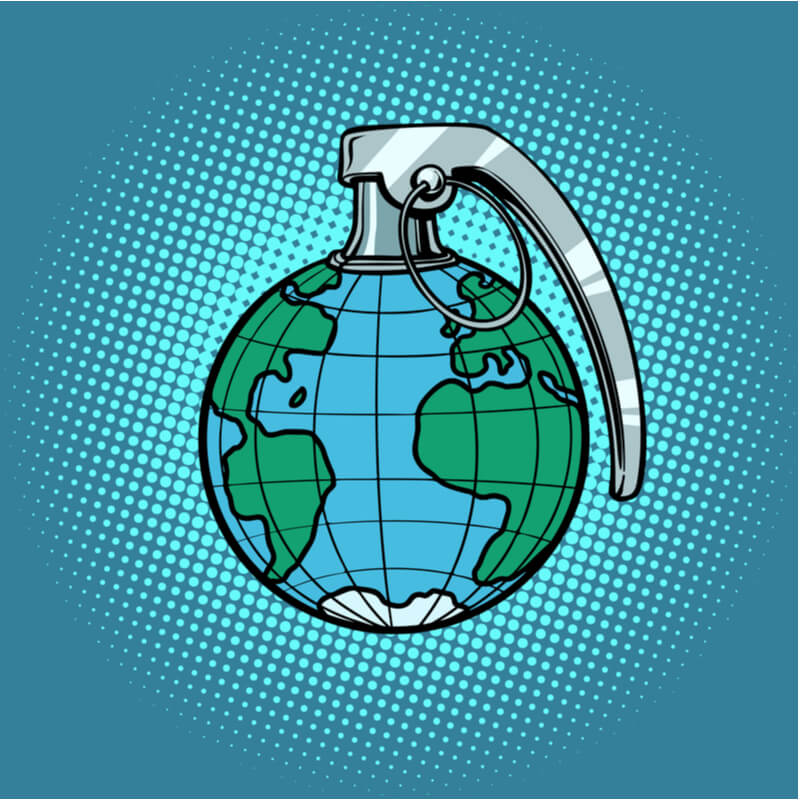 In 2020, I decided to gather all of the environment and climate crisis information I’ve been reading and watching into one blog, which I updated every week. Here is the full year for 2020. And this is the new blog for 2021, which I will also update weekly.

If you want to keep up to date, you can check my weekend reads, or favorite this blog and come back often, so you can stay up to date on the major news about our global environment. Obviously I don’t read or watch everything being published, but I review as much as I can.

I know many people are not ready to face the crisis, and of course, we have even more denying there’s an issue. I understand why this is happening, because the institutions that matter – government, business and media – are great at keeping us confused.

All I ask is, take some time every week to read something on the issue, but please, never rely on one source for information. You can remain loyal to your existing media source, but we all need to stretch outside to get other views. Wouldn’t we prefer the truth? Well we need to do the work to find it.

Read through some or all, or just scan the headlines – it tells a story in itself. Also please share any information or research you find compelling with me. Happy to be tagged in important information and I’m always happy to pass the message on.

I have a resources section at the bottom, so if there are any you value, please pass it to me and I’ll add it there.

The content is in date order rather than packaging it up into sections. I figure the latest is important, and for those who want to drill down further, you can. Lots of alarming information. It is time to act!!

Glacial lakes threaten millions with flooding as planet heats up

Cutting the unexpected carbon culprits in your life

What hydrology can tell us about climate change in Central Asia

‘Tsunami’ of renewables to sweep gas and coal out of market, and drive prices lower

As glaciers disappear in Alaska, the rest of the world’s ice follows

Land Projected To Be Below Annual Flood Level In 2050

Then and now: When silence descended over Victoria Falls

Antarctic ‘doomsday glacier’ may be melting faster than was thought

There is hope for South-East Asia’s beleaguered tropical forests

The EPA Calls an Old Creosote Works in Pensacola an Uncontrolled Threat to Human Health. Why Is There No Money to Clean it Up?

This Wind-Powered Super Sailboat Will Carry 7,000 Cars Across the Atlantic

Hey, methane leakers: Now we know where you live

Climate Point: Earth shifts on its axis and Nestle doesn’t have right to forest water

Do you know where plastic waste in the oceans is coming from?

Earth Looks Like A Living Creature In This Amazing NASA Video

Scientists: Mass Extinction Is Coming as Organisms Flee the Equator

Stalemate: sustainable palm oil struggles to take off in China

How 7 European cities are going circular

Impossible cosmic rays are shooting out of Antarctica

The Speed of Ocean Currents Is Changing in a Major Way, Scientists Warn

Climate Point: New dinosaurs discovered on Earth. Is life on Mars next?

Will India get too hot to work?

Biden plans to cut emissions at least in half by 2030

‘Nothing about the Mekong is normal now’: Anger along Southeast Asia’s great river as water levels become unpredictable

On Climate, Biden Takes On ‘Our Generation’s Moonshot’

How to stop discarded face masks from polluting the planet

Is China edging away from a massive dam on the River Niger?

There’s a Booming Business in America’s Forests. Some Aren’t Happy About It.

After more than 2 decades of searching, scientists finger cause of mass eagle deaths

The Story Behind TIME’s ‘Climate Is Everything’ Cover

Wildlife Photographer of the Year: How many crocodiles can you see?

NFTs Are Shaking Up the Art World. They May Be Warming the Planet, Too.

We found methane-eating bacteria living in a common Australian tree. It could be a game changer for curbing greenhouse gases

The Ocean Carbon Sink Has Set the Next Political Hurdle

Thailand aims for only electric vehicles by 2035 tks Vicky Coburn

No, the Yellowstone supervolcano is not ‘overdue’

How data is transforming the way we care for the ocean

Bottom Trawling Releases As Much Carbon Emissions As Global Aviation

The Pandemic Remade Every Corner of Society. Now It’s the Climate’s Turn

Last Two Giraffes Rescued From a Disappearing Island in Kenya

NFTs Are Shaking Up The World. They May Be Warming The Planet, Too tks Andor Hampala

42,000 years ago Earth experienced “end of days” with mass extinctions

Carbon dioxide levels are higher than they’ve been at any point in the last 3.6 million years

Polar bears are mating with grizzlies to become ‘Pizzly Bears’

The battle for the Arctic

US spies peer into the future – and it doesn’t look good must read!!!!

‘Every choice matters’: can we cling to hope of avoiding 1.5C heating?

Did climate change cause societies to collapse? New research upends the old story.

We Are Doomed’: Devastation From Storms Fuels Migration in Honduras

Seagrasses Turn Back the Clock on Ocean Acidification

Russia is Turning Ever Given’s Plight into a Marketing Tool for Arctic Shipping. But It May Be a Hard Sell

Revealed: why hundreds of thousands of tonnes of recycling are going up in smoke

The Biggest Polluters Are Hiding in Plain Sight

We must better protect wildlife to prevent future pandemics

Shanna Swan: ‘Most couples may have to use assisted reproduction by 2045’

Climate crisis ‘likely cause’ of early cherry blossom in Japan

We sampled tap water across the US – and found arsenic, lead and toxic chemicals

The company behind the Suez Canal blockage spilled 28,800 plastic toys into the ocean in the 1990s

How America can rid itself of both carbon and blackouts

Animals stranded on board 20 livestock ships waiting to pass through the jammed Suez Canal could starve and die if the situation lasts much longer, charity warns tks Philippe Penfold

Exxon: The Road Not Taken

The haze is likely to hit Southeast Asia early in 2021—is climate change to blame?

The Coal Plant Next Door

NSW wild weather: what we know so far about the flooding and evacuations

Is NSW flooding a year after bushfires yet more evidence of climate change?

1% of people cause half of global aviation emissions – study

Plastic Straws That Quickly Biodegrade in the Ocean? Not Quite, Scientists Say

You don’t need a new phone, so here’s how to keep your old one running like new

Walrus spotted in Wales, days after one seen off Ireland

Submarine Permafrost Has Been Overlooked as a Major Source of Greenhouse Gases, Scientists Warn

What I’ve Learned From the Pandemic Year

A Large PR Firm Pledged To Fight Climate Change. Then It Took Millions From A Notorious Fossil Fuel Trade Group.

Why Hollywood struggles to tell stories about climate change

Is it time for “ecocide” to become an international crime?

‘Space hurricane’ that rained electrons observed for the first time

In the Atlantic Ocean, Subtle Shifts Hint at Dramatic Dangers

UN: Global climate pledges will only reduce emissions by 1% this decade

Could plastic roads make for a smoother ride?

COVID-19 outbreak: How we deal with animals and the environment threatens human health

Poaching is sending the shy, elusive pangolin to its doom

Bill Gates Has a Master Plan for Battling Climate Change

Coronavirus, Hunger And The Crisis With A Janus Face

Should Zoos Still Exist or Not? The Arguments For & Against Zoos tks Vicki Kiely

Researchers rethink life in a cold climate after Antarctic find

The Lion, the Polygamist, and the Biofuel Scam

This Climate Deal Is Good for Earth and the Economy

The end of a golden age for oil producers

Nothing to sneeze at: Climate change has worsened, lengthened pollen season across the US

No more snakes to be released in Phuket

Join the world’s largest network for the climate

Now and then: Iceland’s vanishing glaciers

Want to actually fix the environment? Change how buildings are built

I’ve Said Goodbye to ‘Normal.’ You Should, Too. tks Denise Chai

Remove carbon as you grow your business tks Tim Wade

Visualized: A Global Risk Assessment of 2021 And Beyond

Amsterdam Is Embracing a Radical New Economic Theory to Help Save the Environment. Could It Also Replace Capitalism? tks Graham Harvey

Why Ikea just bought an 11,000-acre forest in Georgia

‘We need answers’: why are people living near Dutch goat farms getting sick?

State of Climate Action: Assessing Progress toward 2030 and 2050

Cargill : The Worst Company In the World

Apple will modify executive bonuses based on environmental values in 2021

Scientists say Earth is spinning faster than it has in decades

Florida manatee with ‘Trump’ etched on back prompts investigation

A Lost Decade: How Climate Action Fizzled In Cascadia

Southeast Asia, we need to talk about bilge dumping

Why 2021 could be turning point for tackling climate change

Could a plastic tax be coming to Asia?

$5B Rockefeller Foundation, built on oil, divests from fossil fuels

Court Says No to Drilling for Oil in the Arctic, a Huge Win for Polar Bears

Circular Economy and the 2030 Agenda

THE GREAT CLIMATE MIGRATION – A Warming Planet and a Shifting Population – worth a read!!

More than 1.5 billion masks believed to have entered oceans in 2020

Exxon Knows Its Carbon Future And Keeps the Data From View

The Biggest Climate Change Stories of 2020

The Biden plan for a clean energy revolution and environmental justice

Green is the New Black

Let’s get the job done.