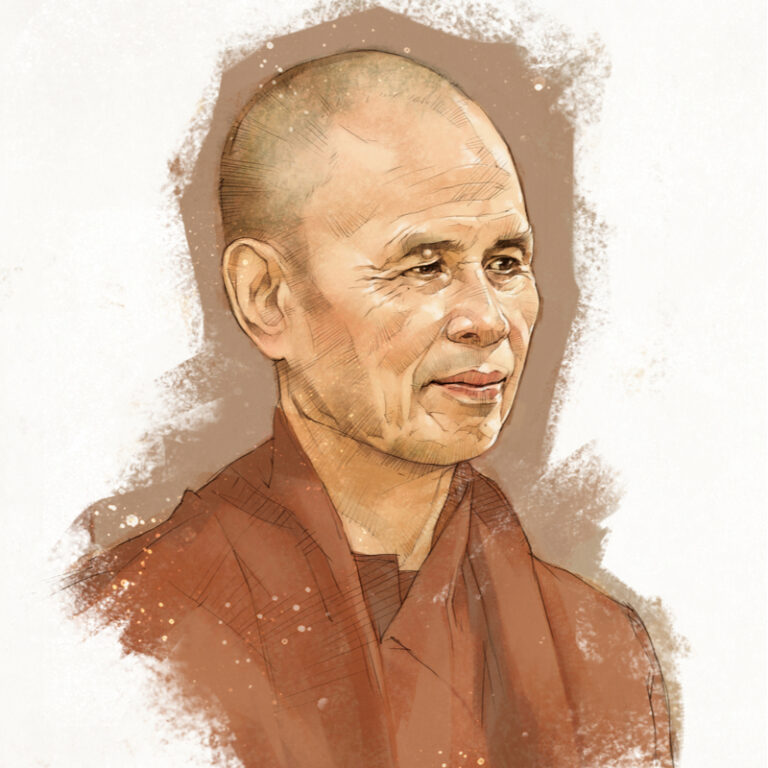 We woke to the news that Thich Hat Hanh has passed. Rather than sadness, I’ve watched love and respect flooding social media, honouring his life and legacy. He is a man who always lived his beautiful truth and never wavered in his message of peace and the power of mindfulness.

As everyone started to share his words, I looked for my favorite quote, and this definitely stood out.

I beg you, please look through the environment section below. There are some very important contributions coming from the humanitarian sector this week, and the message is clear: the climate crisis is already here and we are ignoring it at our peril. What is happening over there, will ripple out and consume the world, if we do not act.

It doesn’t have to be a foregone conclusion, but it is up to all of us to rise up and demand global action NOW.

Some articles of note. Look out for Last Year’s Overall Climate Was Shaped by Warming-Driven Heat Extremes Around the Globe, Inside Climate News.

In 2021, a quarter of the world’s population – or 25% – experienced a record-warm year. It was also one of the most deadly and destructive years on record because of an unusually warm atmosphere.

We saw the impact of this, from the deadly Pacific Northwest heatwave, which killed hundreds and, of course, the destructive fires that followed.

Let’s move onto the Philippines, where typhoons are getting more and more destructive. A country typically hit by 20 storms and typhoons each year, they are growing progressively more destructive. This is a country that contributes less than 0.4% to global emissions and yet, it is paying the price for the polluting North.

And one of the humanitarian pieces – I encourage you to watch the interview. It’s with Inger Ashing, who heads up Save the Children. The question – Are we failing to protect vulnerable children? which was featured in Al Jazeera. It’s a very important interview.

Detailing climate impacts in countries around the world, it’s devastating listening, not to mention, many countries are experiencing these challenges for the first time and climate breakdown is the main driving force.

We are seeing more societal breakdown, civil war and insurgency, child soldiers, abuse of women and children, escalating child marriage, lack of access to education, lack of security, food insecurity, children malnourished, and the list goes on. We can’t ignore this. A malnourished child can never grow into a fully functioning adult. The damage is permanent.

Another article – World’s poorest bear brunt of climate crisis: 10 underreported emergencies. This is a report from CARE International about the 10 countries that had the least media attention, despite all having at least one million people affected by conflict or climate disasters.

Extreme weather along with Covid has wiped out decades of progress around the world, and my heart aches for people working in this field.

From Afghanistan to Ethiopia, about 235 million people worldwide needed assistance in 2021. The number of people in need of humanitarian aid is expected to rise to 274 million this year, or one in 28 people. Equally, more than 84 million people have been uprooted.

Half of all impacted are children. We have to ask ourselves – are we going to leave them drowning in the world’s oceans, freezing in camps across Europe, or forgotten and neglected in the poorest countries in the world?

The accelerating climate crisis is fuelling many of the world’s emergencies.  Add Covid19 into the mix and we see decades of progress towards tackling inequality, poverty, conflict and hunger disappearing before our eyes.

As this is reported in Australian media, the wealth of its 47 billionaires also doubled, increasing at a rate of $205 million a day. Maybe a week of wealth could be donated to these 10 countries? It’s nothing to them.

Because we must state the truth. Their wealth is earned at the expense of the health of our planet’s ability to sustain life and it is creating climate breakdown. It is time for those leading these businesses to start putting that wealth into the solutions we so desperately need.

We must create a new economic model that taxes this extreme wealth if it’s not offered voluntarily. These profits can be used in our countries for nurses, hospitals, vaccines, educators, mental health, to support the poor, and more, but it can also be used to solve the biggest issues in the world, like investing in infrastructure.

One critical example is water management. Many countries are not suffering from a lack of water, they’re suffering from failed governments and local corruption, which means water is not managed correctly. That must be addressed, because we must do all we can to keep people where they are.

We have seen what happens when refugees flood our world. How can we help people stay? And if they can’t stay, how can we prepare for that future, so they can live with dignity?

It is time to look to the future with different eyes and a new economic model. It is time to follow the teachings of wise people, like Thich Hat Hanh.

Do you think of yourself as intelligent and sophisticated? Great piece Mads Petersen. Interesting from a marketing and comms perspective, but equally, the idea of how often I am on autopilot. Have a read.

The Unsu$tainable Truth – is this the answer for the fossil fuel industry? Thrilled to do this podcast with Dr. David Ko and Richard Busellato. We have complex problems to solve and I’m excited by the possibility of this idea in helping to solve both how we reduce fossil fuels, while focusing on solving the challenges for those on the front line of the climate emergency. This is an investment bankers perspective, which makes it an even more exciting possibility. Have a listen and if it resonates, buy the book – The Unsu$tainable Truth – co-authored by David and Richard.

LARRY FINK’S 2022 LETTER TO CEOS: The Power of Capitalism

It’s Not ‘Woke’ for Businesses to Think Beyond Profit, BlackRock Chief Says

What the U.S. Can Do to Stop Extinction

Stop the Use of Wildlife-killing ‘Cyanide Bombs’

Endemic Covid: Is the pandemic entering its endgame?

What “mild” really means when it comes to Omicron

As Omicron Crests, Booster Shots Are Keeping Americans Out of Hospitals

An American Airlines flight turns back over the Atlantic because of a passenger mask dispute.

COVID and schools: Australia is about to feel the full brunt of its teacher shortage tks Claire Kielty

This is the ‘worst food ingredient for your immune system’—especially during Covid, says immunologist

‘Deltacron’: Should we worry about new COVID-19 variants merging?

Cate Blanchett: I dressed up as my daughter’s teacher in lockdown

No vaccine, no French Open for Djokovic as rules tighten

Why are my lymph nodes swollen and sore after a Pfizer or Moderna COVID booster vaccine? Tks Leah Hannan

Halting Progress and Happy Accidents: How mRNA Vaccines Were Made

The Army of Millions Who Enforce China’s Zero-Covid Policy, at All Costs

A Dam in Syria Was on a ‘No-Strike’ List. The U.S. Bombed It Anyway.

Kazakhstan unrest: ‘If you protest again, we’ll kill you’

Kamala Harris one year: Where did it go wrong for her?

Tory MP David Davis to PM: In the name of God, go

Here’s How to Get More Women in Tech

Airlines Warn of ‘Catastrophic’ Crisis Ahead of Wednesday’s 5G Rollout

The Mismeasure and Misuse of GDP tks Robert Kirubi

How to Spot a Bad Boss During an Interview

Look around you. The way we live explains why we are increasingly polarized tks Sue Adams

Every Single Cognitive Bias in One Infographic

Tonga tsunami: Anxious wait for news after Tonga cut off

Get away from shore – US and Japan warn on tsunami

My Gentle, Intelligent Brother Is Now A Conspiracy Theorist And His Beliefs Are Shocking

Amanda Gorman: Why I Almost Didn’t Read My Poem at the Inauguration

Escaping the Trap of Efficiency: The Counterintuitive Antidote to the Time-Anxiety That Haunts and Hampers Our Search for Meaning

How to quiet your mind by doing a brain dump

If I’d Listened To My Doctor, I Would Be Dead Right Now tks Shian Chuan

As a Gen-Zer who loves TikTok, recent reality shows about influencers made me never want to become one

The Four Buddhist Mantras for Turning Fear into Love

Ceremony of the Transition of Thich Nhat Hanh

M’sian woman, 83, raised abandoned child for 22 years since she was 2 months old

7 lessons about finding the work you were meant to do

Singapore named most Instagrammable place in the world by travel publication

The Third Self: Mary Oliver on Time, Concentration, the Artist’s Task, and the Central Commitment of the Creative Life

You can read the reviews, including a five-star review on ReaderViews, an excellent one on Booklife, Book Commentary and Blue Ink Reviews. I’m also collating reviews on my Website too. Have a look and grateful to everyone who has written or recorded one.