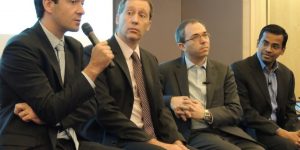 Recently, Microsoft hosted Kenneth Cukier in Singapore. Ken is the Business Correspondent with The Economist and co-author of a new book entitled: Big Data: A Revolution That Will Transform How We Live, Work and Think, which was launched in March 2013. Presenting on the ‘what’ rather than the ‘why’ of Big Data, there were many take-aways from the events I attended in Singapore.

Before delving into Ken’s insights, there is no question that Big Data is on the horizon for the regions’ CIOs and business leaders, however there is also a lot of confusion around what it actually is. Donald Feinberg, VP & Distinguished Analyst, Information Management, with Gartner (who I also met recently), summed it up very simply when he said: “Big Data is not a market, Big Data cuts into every market – it’s a piece of the server, software, networking and analytics markets. It’s very important to understand that it is not a market by itself.” Donald also explained that enterprise customers are not looking for Big Data solutions, they are having issues with data and that is the problem they need to solve.

Big Data refers to three areas of the data pie:

So what is Big Data then? The volume, velocity and variety-type assets, alongside the new, innovative tools that analyze and manage them. Simple.

If you’re still confused, here’s a Forbes article contributed by Gartner for a better explanation.

Bringing the discussion back to Ken, who brought in the human angle around the discussion, he started with the fact we are producing more information than ever before, with information doubling every two years. The scale of this growth is actually quite staggering. The challenge in the past, however, is that data was expensive to collect, so we limited ourselves. That is changing with technology advancements – particularly in the analytics space – and Ken explained that today’s data capture capabilities means we can harness more – “it’s like the ‘Black Swan Effect,’ it allows us to factor in the outlier.”

One interesting societal Big Data example he discussed is happening in Canada, where the medical fraternity is gaining tremendous benefits from information insights. Nationwide, Canadian doctors are capturing 16 vital signs on premature babies (which is adding up to 1,000 data points/second), and this information is allowing them to spot the possibility of infection in babies 24 hours in advance. As an example of the benefit of this project – in the past, when a premature baby stabilized, the doctors took it as a positive sign the baby was on the mend. However, now they know that when a baby stabilizes, this is, in fact, the danger sign. Doctors are unclear about the biological mechanism occurring that is putting the baby’s life at risk, but now they have a bigger picture of what the information actually means, so they can act long before the baby’s’ life is at risk. In this case, Big Data is saving lives.

Ken discussed many more cases of how Big Data can benefit society, and I found it an incredibly interesting topic: “we are moving into an era of Datafying aspects of living – just as Facebook datafies our friendships and Twitter datafies stray thoughts and whispers. In 50 years, we’ll look back to this time and compare how we manage data today to how we view bloodletting from the past.” I liked that comparison.

According to Ken, Big Data is a huge opportunity for Asia. It relies on three areas to succeed – skills, mindset and data:

Globally, Ken sees this as a significant global shift, the likes of which does not happen often. He said it’s comparable to the early computer science revolution which really started in the 70s and 80s – and could only grow as quickly as Universities could graduate computer science professionals into the market. It was a decade before the Universities were able to catch up with demand. The core skill of Big Data is mathematics, and world-wide, this is where Asia always comes out on top. Ken believes the world leaders in Big Data will be people with the skills and insight to collect and interpret data – which means this is an area Asia can step forward and own.

But “in the next 15 years Big Data will become how it is done, therefore it can’t sit in a strategic silo. It needs to be technology for all,” said Ken.

Big Data means we have the ability to harness the social value of information to improve life for everyone, but there is one vital piece of the pie that needs to be taken seriously – privacy laws must be rethought and reconfigured. In Asia, where the current laws are not as rigid as the US and Europe, this provides an opportunity right now. However, Ken believes a comprehensive privacy debate is needed immediately and it needs to be conceived in line with the benefits for humankind, while also factoring in free-will.

To illustrate this point, Ken said: “we are moving from the issue of privacy to propensity – so the ability to predict crimes based on past crimes – however with propensity comes the need to safeguard freewill.” I actually found the freewill aspect fascinating, as understanding someone’s ability to do something, based on a whole host of data inputs, doesn’t mean they will actually do it – such as committing a crime. Therefore, in the future, will we act or intervene before something happens, potentially changing the path of someone’s life? Or do you allow that person to play out their life and only act when harm is done? Interesting right?

It’s certainly a fascinating discussion and a hot topic in the business world right now, but one thing I know for sure – the collection and use of data is certainly going to keep the legal professionals busy for the next couple of decades.

As I expect it to be a strategic asset for communicators and marketers in the future, let me know if Big Data is on your horizon and what are your primary goals? Also the core issues you see moving ahead? If I don’t know the answer, I’m now surrounded by people who do.

With that, I am definitely looking forward to reading Ken’s book – Big Data: A Revolution That Will Transform How We Live, Work and Think – it’s next on my ‘to read’ pile.

PrevPreviousA Change of Direction
NextInnovation, Evolution and Technology for Marcoms in AsiaNext