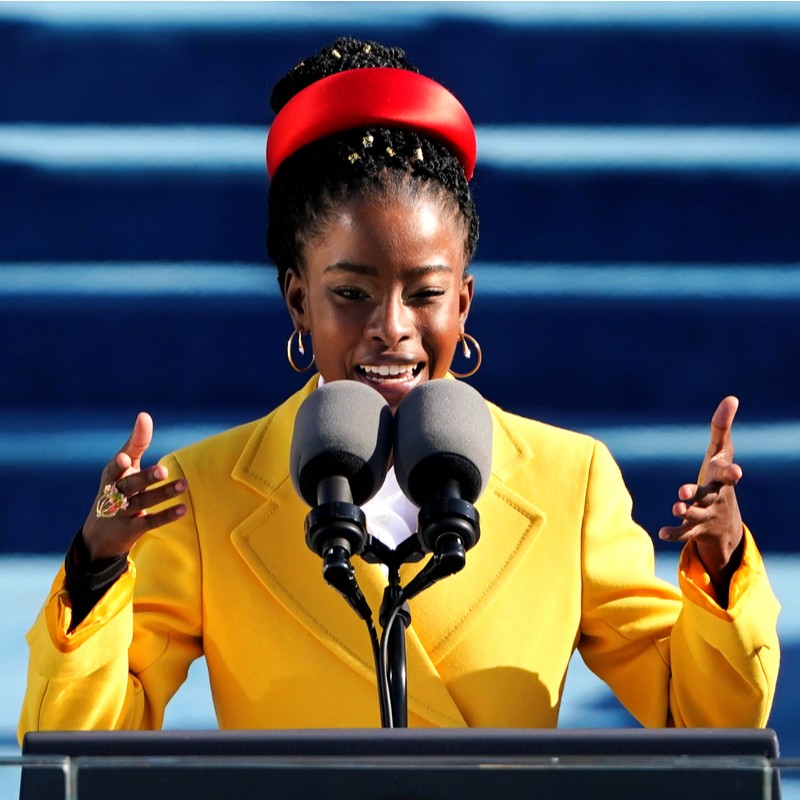 #38 Weekend reads – a reminder to seize your moments

There has been a lot of beauty in the media and across our social channels for the glorious gift of words Amanda Gorman gave us at the 2021 US Inauguration. It was a truly remarkable moment, one that unified the world. It will be discussed for years to come and we all know this young lady will be a figure in our future.

Watching her deliver her poem, as well as the interviews she’s given since – which are just delightful, watch them, especially this one. Thanks Kerrie Phipps for sharing. Both James and Amanda are just gorgeous.

However, one thought that has been constantly rising in me, is that she seized her moment. In my forthcoming book, Uncommon Courage, I talk about lots of things, but one is seizing our moments. Across the span of any life, moments are offered to us, and if we step into these moments and embrace the opportunity that has been given to us, it opens doors to more, as well as paths we don’t necessarily know were open to us before.

To seize a moment, you have to be terrified and do it anyway. You have to get ready and go through days, weeks, months or years of gruelling practice. However, the important part of seizing your moments, is you appreciate the opportunity for what it is and you step into it – terrified – but you do it anyway.

I want to encourage anyone reading these words to seize your moments – even if it scares the life out of you. The people I admire the most do this time and time again. Those who struggle to find their path or joy in life let fear and nerves get in the way. Seize your moments. Only you can do that.

I hope we all take inspiration from what Amanda Gorman did this last week. She stood before the eyes of the world and no one will forget her moment. Bravo bravo bravo. She brought hope to a bruised and battered world. I loved it.

The Business Crisis Shortlist: How to Plan for a Crisis my amazing friend and former colleague, Brian Sibley

My friend, Ellen Lai Costa, launched her new book – Selfcare isn’t Selfish: The Art And Science Of Caring For Yourself Is The Basis For A Woman’s Wellness In All Facets Of Life. Congratulations Ellen, so thrilled for you. If you want to get an insight into her thinking, she also published this article in Thrive Global: 9 Simple Steps To Create The Perfect Home Retreat, Recharge And Radiate. Check it out and take wisdom from her words. Self care is so important for all of us, especially at this time.

A special share. Read: “I’m the main character”: the commodification of the individual under modern capitalism my beautiful friend Nicole Lockhart, who is a high school buddy and one of my best friends, has an amazing daughter, Millie Lockhart. Millie is an incredible writer, and I found these words expressed so beautifully. A view from the younger generation. Well worth a read.

And finally, the amazing Gilbert Hill. If you want to understand your data rights, Gil is your man. Brilliant interview and well worth your time!!

I read a heart breaking story this week, of a man in Phuket willing to sell his eye so he could provide for his family. It boggles the mind that anyone could be so desperate they would feel the need to take such drastic action. But all over the world, 200 million people – and rising – are in a state of severe desperation. We cannot look away. Please donate where you can and let’s come together to get through this crisis. Some suggestions World Food Program., UN Refugee Program, PowerOf , Kiva.org, Soi Dog Foundation. If you can afford to be generous, now is the time to help your fellow human.

We can also take inspiration from Bernie Sanders: Bernie Sanders turned his inauguration meme into a sweatshirt to raise money for charity.

Why Ikea just bought an 11,000-acre forest in Georgia

‘We need answers’: why are people living near Dutch goat farms getting sick?

State of Climate Action: Assessing Progress toward 2030 and 2050

Cargill : The Worst Company In the World

The Coronavirus Is Evolving Before Our Eyes

Microsoft, Salesforce and Oracle back plan to develop a digital Covid vaccination passport

One Year, 400,000 Coronavirus Deaths: How the U.S. Guaranteed Its Own Failure

Joe Biden’s US must act like a new leader, not a returning one

‘He Was Just Everywhere’: A Tired Country After Four Years of Trump

Democrats, Here’s How to Lose in 2022. And Deserve It. Tks Brian Sibley

‘We All Got Played’: QAnon Followers Implode After Big Moment Never Comes

Trump Is on the Verge of Losing Everything tks Barry Graubart

Videos Show How Rioter Was Trampled in Stampede at Capitol

Most Americans Think Trump Will Be Remembered As A Subpar President

Donald Trump’s farewell: We did what we came to do

Will the Trump corporate backlash make a difference?

‘They’re Trying To Cancel Me’: MyPillow CEO Says Retailers Have Dropped The Brand Amid His Baseless Voter Fraud Claims

Dear Gavin Williamson, could you tell parents what a fronted adverbial is? Tks Tony Whybrow

Bishops throw cold water on the most Catholic inauguration in history

As an expert on US militias, I know about the psychology of pro-Trump rioters. Biden should too

10 steps reinventing yourself in 2021, according to a transitional life coach tks Sally Foley Lewis

American Kristen Gray to be deported from Bali amid Twitter row

Scientists Have Described a Dinosaur’s Butthole in Exquisite Detail

Tiffany Trump’s billionaire fiancé Michael Boulos, 23, proposed to the 27-year-old with a 13-CARAT emerald-cut diamond from Dubai that is estimated to be worth up to $1.2M

What jumped out at you this last week?

PrevPreviousCEOs have been called to lead, we all have – Edelman Trust Barometer
Next#39 Weekend reads – two stories, one confusing, the other inspiredNext