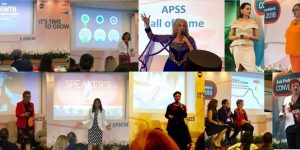 I’ve just returned from an incredible few days with my speaking tribe in Singapore, attending the Asia Professionals Speakers Convention 2018, organised by APSS. It’s my fifth Convention and this year, I finally decided it was time to put my hand up and say OK, I would like to speak.

Let’s just say asking to speak in front of a room full of professional speakers is probably the most daunting #JustSayYes I’ve ever done, but then, you’ll never get more love from an audience either. It was a brilliant experience and feels like the beginning of an exciting new chapter professionally.

However, the best part about this Convention was, right from the start, Fredrik Haren – The Global Conference Speaker on Creativity, Change and Global Mindset – who was Convention Chair this year, had a vision for the Conference. He decided it would be a 50/50 split of male and female speakers. Diversity was a big focus too.

I can’t tell you how amazing it was to be part of this Convention just from this perspective. Incredible. How often are speakers split at 70% male/30% female, if not worse?

Every attendee was thrilled to be part of the most global professional speaker’s convention in the world – 250 delegates from 25 countries, 34 speakers from 13 countries – but it was the conscious effort up front to create a balanced agenda that was exciting for me.

However, I missed something else. I was chatting with my old mate Shaun McEwan in a discussion on Keynote, Asia’s Women Speakers (sign up and follow this page) and he made the observation: not only were there more women on stage, there were more women in the audience too. We had close to a 50/50 split of delegates.

And when he said this, it occurred to me, he was absolutely right.

Which begs the question. Could the solution to equality be that when you take a proactive approach to equal participation, it helps everyone lift their game? It encourages more women to step up? It opens the doors to equality, because the strategy meant it was a commitment no matter what?

I asked Fredrik if there was a distinct difference…

“In the first round of evaluations, out of the speakers who made it to the final evaluation, 73% were men. There were similarly more men than women applying to speak. However, the final selection was not only supposed to be from the call for speakers.

“I think the lesson here is: there are hundreds, if not thousands of speakers, who I could have picked, but I needed 34, so to say that 50% preferably should be women, was not in any way a reduction of quality. Instead, it was an investment in time to go out and find them. That’s all. Some women had to be convinced, but so did some men.”

“It is true that we made a conscious choice of inviting female speakers to attend as delegates, to get a better mix and to help support more women on stages – because if women don’t come to learn how to be speakers, they will not end up on stages!

“My point is: I really cannot see a difference in how men and women speakers behave before, during or after the speech. I really do not feel anyone felt oh now it’s a women speaker.”

“We had such diverse speaking styles, the only difference is that we had 75% men applying, which is probably representative to our industry, at least, in Asia.”

Thankyou Fredrik. Great to understand the practicalities behind it.

Why did I take so long to apply?

So it’s that bit – the confidence to apply up front that struck me in Fredrik’s comments. I mean it took me five Conventions to put my hand up.

Why? Because I really wanted to be confident that my message was ready and applicable to the audience before I said yes.

But if I did it four years ago, or even three years ago, while I might not have mastered the message, maybe the instant feedback would have helped me master it sooner? Essentially, I could have pushed my career forward faster if I put myself out there sooner?

Just looking at what I did to prepare for this opportunity. The creation of my speech for Convention stretched me, and now I’ve done it, I have something to shape for professional audiences.

It’s also given me confidence in what I have to say, so now I need to master the how I say it bit. BUT I can’t get there until I test it out right?

Our own worst enemies

That’s the problem many women have. We want to achieve perfection. We wait for the right time. We wait wait wait! But if there’s one learning I want to share – it’s the testing along the journey that helps you master your message too. We need to embrace that.

Men are awesome at it. Men have a greater capacity to say I’m going for it, watch out! That’s a great thing and us ladies need to do it too!

Of course, I can’t possibly say that this event presents hard statistical data that proves it works, but maybe this is the magic sauce up front? That commitment to a 50/50 split?

It’s not a quota – I’m not a fan of quotas, even though sometimes it is required – but when you make the commitment, you also put in more effort to convince the ladies to step up, because for now, it appears we require more convincing!! Let’s accept that fact and work out ways to overcome it I say!

It’s never because we don’t think we’re worthy, it’s because we just think differently full stop. Therefore, perhaps to tackle it, this is the approach to take?

Stepping up is a core challenge with equality and women have a role to play in overcoming this. We have to take our responsibility too.

However, as we work to gain that confidence, perhaps that conscious decision has to be made. That’s what happened at this Convention. There was no discussion. We had a goal and I salute Fredrik Haren for pushing it through and celebrate every woman on stage and in the audience.

Ladies, I think we have momentum. Women are stepping up, more and more women are claiming their voice, we’re ready to say I have something to contribute to the world – and to that I say: go go go go!

Equally, to the gents in the room – thank you. So many of you are stepping up with us and speaking out to support equality. I salute you. We do it together, not despite each other.

As I always say – everyone wins with equality, and I mean everyone. Let’s make it happen together.

Do you have an example where a conscious decision was made in advance for a 50/50 split, and saw that the associated benefits were much much bigger? Please let me know. Maybe we can prove this model works with some broader statistical data??