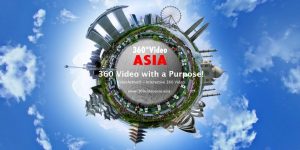 I recently caught up with my friend, Andrew Psarianos, CEO of Picture Perfect Productions, and he showed me a 360 video example that made my jaw drop. Until that point, I’d seen 360 examples, but I hadn’t seen a business case. Now I had.

It was of Singapore’s stunning Marina Bay and rather than just moving around on my mobile to see the Bay’s beauty in 360, there were map markers on key buildings – Marina Bay Sands, the Merlion, the Esplanade Theater, Hotels, and more. When you clicked on the markers, an information window dropped down to explain what you were seeing, and that’s why I got excited. Content integrated into 360 video. The possibilities!

This is a map marker BTW. You’ll see them on every map you use.

I mean, think of the opportunity for Tourism Boards? The Marina Bay Sands complex? The hotel industry? Training? Oh my, it was exciting.

But the boys at the newly launched 360 Video Asia were a long way from being done. They’ve been building an impressive platform incorporating gaming technology, as well as producing stunning proof of concept videos. Since I first saw it, things have moved forward rapidly and they are generating a lot of interest. The future is 360.

I had to spend some time with Andrew and Todd Martin, digital content strategist at 360 Video Asia, to understand this more from a content marketing perspective.

“We believe that visuals need to be dimensional, because we don’t live our life in a flat screen,” said Andrew Psarianos. “I find that most people are still thinking in 2D, even if video is their day job.”

Todd Martin is as excited as Andrew when he talks about 360 video potential.

“It’s a spatial product, so you can use it to describe any space. If you think about any situation that could benefit from describing the space around you, this is what brings it to life. Think about the importance of OH&S spatial awareness in large manufacturing workplaces, or for training crane operators or fork lift workers, and then there are limited inspection sites, like drains or sewers. You don’t need people in tight places anymore with 360 video.

“We’ve taken gaming technology and applied it to video. But gaming takes months or years to develop. We can do this in weeks and it’s cheaper than developing a game.”

Andrew also said: “It’s superb but we also believe 360 needs something to keep you in the bubble. If it’s just visual, it’s boring, so now we can tell the story too. There is only one other company in the world doing something similar, but we’re the first in Asia.”

We discussed some of the ways Andrew and Todd see its potential:

Can you see why I got excited? We could have talked about potential all day, and when I was writing the above, it got enthusiastic all over again. This is going to change the world.

As Andrew said: “360 video is limitless, and the only thing that will limit its potential is your imagination.”

I see it and love it. Think about any space you have. How can you use 360 video to build your brand, help your customers, save money or empower your employees? That’s the potential.

I can’t show you the interactive format here, but the team at 360 Video Asia put a demo together and here it is to give you a flavour…

What do you think? Have you seen an example that you like? Have an idea on how you think it can be used successfully?

If I’ve inspired you, definitely get in touch with Andrew and Todd. Both terrific people. You’ll not only get world-class results; you’ll have a lot of fun while you’re at it.

Thank you so much for reading my blog. I really appreciate it. If you like this, I’d love a comment, or your most inspired idea for 360 video? Of course, please feel free to share with your communities, because that’s what this is all about today – sharing and giving to each other. If you like my style and what I talk about, feel free to follow me on LinkedIn, Twitter or on Facebook.

You can follow The Digital Conversationalist on LinkedIn here. The event/workshop showcase page is here, and this is our Facebook group, where we encourage conversation.

PrevPreviousPersonal branding requires grit, determination and never ever giving up
NextMicroblogging is a perfect way to start building your personal brandNext