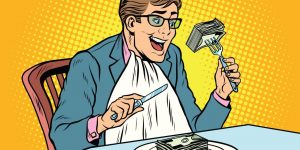 When did we all get so shallow, or have we not changed at all?

As the years roll on and social media marketing becomes more embedded in our lives and information gets more and more infobese, I believe we’re starting to really understand both the positive and negative impacts of social media in both our personal and professional lives.

Of course, the rise of hate speech and the impact it’s having in dividing societies around the world, is also discussed a lot too, and much of this is attributed to social media marketing as well.

But can we just blame social media?

Here’s the problem. I am not 100 per cent bought into the argument that social media is responsible for all that ails the world today. We have been at this point consistently throughout history, where hatred, division, and attacks on “others” existed long before Facebook, Twitter, Instagram, SnapChat and all the other platforms existed. Think Rwanda, the Balkans, and all the way back to Nazi Germany – if we only look at living memory.

Where we are right now – in this fractured world we’re creating – we have been here before, except today, we also have the Climate Crisis to contend with too.

As someone who is an avid history reader, I know that division between people – all throughout human civilization – is a quality we have consistently demonstrated. We’ve never lost the capacity for this escalation, because it appears to be embedded deep within the human psyche.

This is one of the reasons I think we should challenge this idea of blaming the tools of our time, because when we do, we never address the underlying reasons that seem to have always existed in the first place. We keep coming back to the same, ugly place, regardless.

I personally find it depressing we can’t evolve and grow beyond this; however, we can never grow until we face the fact that what we have built – collectively – as a global society, is what’s broken, not the tools we’re using right now. But that is a whole other topic…

We must address hate

Obviously, we will never get rid of extremism – it will fester outside of social media even if it is banned, as all extremist ideologies do – but at least we can have a safer place for the rest of us to participate and enjoy the beauty of what is possible with social.

However, there is another issue impacting us too

And that is how shallow we seem to have allowed ourselves to become. I am extremely concerned about shallowness, because it takes us away from what really matters, and we are allowing ourselves to be distracted by utter nonsense! WE HAVE GOT to get focused right now. Our world is in a mess!

But how can we possibly do what we need to do when people aren’t going deep anymore? When we’re not taking the time to read or watch what matters? To talk about what matters. The image of human zombies on their phones (regularly characterized in cartoons) is spot on!!!

We’re skimming important information and spending time on fluff. We are so distracted by things that bring no value into our lives, and it’s creating huge epidemics of loneliness, isolation, emptiness….

In fact, much of what we spend our time on seems to be information or entertainment that makes us suffer emotionally – jealousy, gluttony, greed, etc… That’s why I stopped reading women’s and girl’s magazines as a teenager. It made me feel horrible about myself and one day I said, no more!

If something makes you feel bad, stop doing it, right?

As an example of shallowness, did you watch the Netflix film “Fyre, The Greatest Party That Never Happened”? Or perhaps the Hulu version? If you haven’t, please do! It will blow your mind.

When I watched the Netflix one, it made me want to put my head in my hands and weep. Of course, much of the story is focused on the organisers and their epic failure to deliver, but there were so many other aspects to this story.

The one I couldn’t wrap my head around were the influencers used in the social media marketing.

All beautified and, in my opinion, speaking utter drivel into their selfie sticks, while capturing themselves on the journey to the festival (feeling jealous viewers, look how lucky I am?) and then their complete outrage at the shambles when they arrived. OK I admit it, that was quite amusing…

Although it appears today’s influencers struggle with the “getting on with things” skills when chaos reigns! I mean, did you watch them turn on each other? When the chips were down, it was each person for themselves and screw everyone else. That is not something to admire!!

I couldn’t help thinking – WHO WATCHES THESE PEOPLE? No really, who? Are our children being influenced by this mindless, selfish, self-absorbed rubbish? All I know is I wouldn’t have liked them as a young person, and I hope my children have the same sense, but how can I guarantee that? I’ll do my best, that’s all I can do.

I know there are a lot of great people doing great work in the influencer space, but what I saw on this documentary was utter rubbish. What I see over my boy’s shoulders when they’re on YouTube is utter rubbish too. Watching influencers at work, it feels like the world is upside down and I hope this isn’t really where we’re going as a species? If so, I want to get off!!!

Don’t get me wrong, I do appreciate the need for escapism in our hostile world right now but read a great Fantasy if you want to escape? Subscribe to National Geographic. Listen to amazing podcasts or be inspired by TED Talks. Surely, it’s better to invest our time in something that will help us grow, not suffer jealousy because we don’t have what they have!!

For me it’s all just senseless rubbish and delivers no value to anyone. I hated seeing “Fyre, The Greatest Party That Never Happened”. It made me despair for humanity.

What are we creating?

If I close my eyes and visualize much of the world we’re building right now, there’s no craftsmanship in what we’re creating. No elegance. No beauty.

It’s loud, ugly, greedy, desperate, selfish, and it’s not only killing us (potentially leading to human extinction), it is leaving people disconnected from what really matters. We are lost. We have no purpose, because nothing we’ve created is feeding what matters most on a deeply spiritual level – whatever that means to you.

It’s why so many people are out there seeking today. Its why suicide rates are up, especially amongst the young. Why more people are feeling hatred towards others. And as the old religious institutions lose control, people are seeking gurus and thought leaders to show them the path to purpose. To show them the way back, away from this soulless consumer life, that leaves us feeling completely unfulfilled.

We are starting to comprehend that there is “no dream’ that will make us happy, because the dream locks us in to buying more stuff and into more debt. And we’re finally figuring out that stuff cannot make us happy – it’s slowly catching on…

There is no escape. We’re all in this together

Even if we want to, we cannot escape. Because what we have created together, can destroy us together too. We can not live in the lush green hills or by the ocean to get away from the mess either. We are all linked. We are all bound.

So, what are we going to do about it? Let’s unite and commit to turning it around. Let’s stop worshipping at the altar of stuff. Let’s stop the short-cut mindset. Let’s stop honouring those not delivering value and meaning to the world and focus instead on those fighting to change everything for the better.

Let’s spread a message of beauty, acceptance and value.

Let’s clean the world up together.

Then let’s create a world where all are truly equal and respected.

Let’s get rid of laws and colonial thinking that puts people/communities/countries/regions below us.

Let’s stop the mindset of pillaging the earth for growth at any cost.

Let’s suffer the sacrifice that must come with it so we can save ourselves.

And most importantly, let’s step out of this chaos so we can think straight, and spend time on what really matters. Trust me, most of our FOMO anxiety is based on missing bullshit.

We’ve got to go deep and use these amazing minds we’ve been given. Stop skimming and let’s think deeply. Let’s read information that matters. Let’s give ourselves the space to sink into knowledge.

We must. Stuff is killing us. Fear is killing us. We’re on the wrong path. We’ve built the wrong world. When only a tiny percentage are winning, that means the vast majority are losing. We can never know peace when we accept that as the status quo.

Is it easy? Hell no! But I want our future generations to have something better than what we had, something we can be proud of and say – we built that for you guys! Go, be awesome, and keep making it better for everyone after you too.

But we have to start the work now. And it’s going to be hard, because we must break it all apart and then build something better. There will be pain. The world will reel financially when we do it.

However, it’s either that, or we don’t change anything and then everything will break anyway. Surely it makes sense to get ahead of this.

Let’s own our voices and change the trajectory

I am reading some truly frightening information, and I am seeing a horrible path ahead for all of us if we don’t change now. The children of the world are seeing it too. Sometimes it feels like it’s inevitable, but I am an optimist and I don’t think it’s too late.

And if you don’t think it is, what can you change? Where can you make an impact? Climate is a big issue for me and I’m taking action in ways I think I can. Let’s all take action in the areas we think are important.

We need everyone who cares about the world to step into and own their voice. Because right now, we’re being drowned out by voices we just can’t understand. Voices that can’t grasp the path we’re on and the damage that can be done to all of us, including them.

We can do it. We can rise up together and change it. So, tell me in the comments, what do you think we need to do to turn the ship around? Are you willing to own your voice and take a stand on it? And, do you still have hope?

Check out our co-authored Best Selling Book – Unleash Your Voice – Powerful Public Speaking for Every Woman – that I’m proud to be part of!