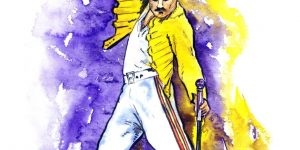 Freddie Mercury, the legend, the rock god, is my personal idol. Who’s yours?

I saw Bohemian Rhapsody, and after the first negative reviews came out, I was starting to get anxious – please don’t screw this film up!!

All I can say is: it was GLORIOUS! A beautiful movie, about one of the world’s greatest talents, but also a look deep inside his soul. I know the timeline wasn’t exact, but I didn’t care. I loved it.

One of my first ever memories was about Queen. My dad put me in front of the TV when I was four and said: watch this. It was Bohemian Rhapsody. That memory remains clear to this day, and it was the start of a love affair with Queen and Freddie.

After that, my sister and I were best friends with two sisters down the road – Emma (RIP my darling) and Claire. We were (and still are) all Queen crazies and are unapologetic about it. I can never get enough Queen!!

Although, I must say, it made things interesting when I met my husband, Steve. How the hell did I meet the only British person who doesn’t like Queen?? Still no idea how I managed that. Anhyoo.

Freddie is my idol

The celebrity, the superstar, the enormous character, the showman, the performer, the legend… yes, Freddie has always been my personal role model. Brilliant, amazing, wondrous, unique, Freddie. I adored him, I mourned him, and I’m sure if I was born male, I would’ve worked really hard to mimic him.

Instead I could only mimic ABBA and Billy Idol. That was fun too.

Why do I admire him so much?

I often hear people talking about the people they admire and I’m always curious to understand the reasons they do. It’s such a unique thing and an insight into the person sharing. So, here’s some insight into me…

He broke ALL the rules

Probably the most important thing I admire is: he said screw it to all the rules. Just because it had always been done that way, didn’t matter to him. He mixed musical genres with abandon, dressed however the hell he wanted, and he got braver and braver as his journey evolved.

One of my favorite Seth Godin quotes is (approximately): if we follow the data, all we get is more of the Kardashians. Same with rules.

I loved him for being a rule-breaker and it definitely had a massive impact on me. I believe rules are nothing but guidelines that need to be carefully considered, and tossed away if they don’t serve. I mean, who wrote the rules anyway?

When I talk about social leadership, people often tell me the rules – blogs should only be 400 words, you should post at 4pm on a Monday for maximum impact…. I’m like, who says? I have been in this game a very long time, and the rules were quickly developed and wrapped around social media. Too quickly in my mind, and the rules completely ignore the only one that matters – when it comes to social leadership, the only rule is: be awesome. That’s it.

Today, more than ever, we’ve got to break the rules, every chance we get, no matter the cynicism around us.

He had an unbreakable belief in himself

Self-belief, one of the biggest struggles most of us mere mortals face, holds back the greatest people I’ve ever met. There are so many reasons why we don’t believe in ourselves, but if we could all be a little bit more Freddie in our self-belief, imagine what we could achieve?

We all need to embrace our inner magic and go out there and own it. We might face criticism, scorn, judgement, and more (although this often comes from people struggling with their own self-belief), however, I have also discovered that if you can do it – if you can embrace your inner magic – you’ll attract more magnificent people to you. Self-belief is a huge gift to give to yourselves, in many many ways.

But his self-belief also had no limits. He was aiming for the stars and he got there!!

Repeat after me – I Refuse to Play Small!!!

One of the most amazing qualities of Freddie, was his genius. Not just as a musician, artist and performer, but as a visionary. He changed the field of popular music. He pushed it to new heights. He took his art where no other Rock God had taken it before. I mean, the man sang opera with Montserrat Caballé!! Rock stars weren’t singing opera in those days…

He also never stopped working to refine and improve. He was constantly transforming, and that is why so many artists put him on their list of greatest inspiration to this day.

Freddie wasn’t looking for shortcuts to success, because he knew they don’t exist. Genius requires commitment, dedication and pushing yourself constantly. It’s about sacrifice. To be the best, you can never stop!

For me, this was always reflected in his art – even the art considered failures by the market… whatever that means. I loved it all.

If you haven’t watched Barcelona, please, sit down and enjoy

What a showman! He owned the stage and was marvellous to watch. In small ways and huge, I feel thrilled every time I watch him perform – even if I’ve watched it a million times already! Even if I’m watching an actor playing Freddie – I’m still thrilled!!

And wow, could he move a crowd. He was magic, and while our costumes in life might be a little less dramatic, putting on a show is a gift we give to any audience – even an audience of one – because it shows them how much we care about them.

Yes, putting in that extra effort to delight your community… what do you think, should we all do it more?

Here’s one of my favorite Queen songs – lesser known, but brilliant

He understood his audience

Something I’m really passionate about is: how do you drive an audience to care? To listen. To hear you? Putting yourselves into the shoes of the customer is the centre piece of succeeding in business (whoever that customer is for you) and it’s a critical part of my social leadership message.

But here’s some insight. The vast majority of people have no idea how to see the world from their customers point of view. It’s a rare talent, so if you have it, celebrate it.

Back to Freddie – boy, did he understand his customers! He could entertain a crowd like no one I’ve ever seen. He brought them in, they became part of his music. He was brilliant at it.

Oh Freddie. What an impact you had on me, for so many reasons. And while I definitely appreciate the greater group of Queen contributing to all of the above, it was Freddie who always stood out. And yes, I write this having never met him or known him. But I’ve heard his words all my life.

If you’re curious, this is my Life Song… should make those of you who know me smile…

As life moved forward, I grew up, Freddie passed on, I continue to read everything that is written to understand him more – including his biography, which is well worth it – and even today, I want him to remain in my life. Thankfully, we now have the movie, which means Queen’s music will continue to be in our world and influence another generation. My two boys love him too. Awesome.

I’m all set. Freddie’s influence will live on.

So now it’s over to you. Who do you adore? Who had an amazing impact on you? And what would you want to talk about over dinner?

I would have to ask Freddy about the homophobic backlash he experienced – it was such a different time then. But also, coping with failure and coming back from it, time and time again. That would be fascinating.

PrevPreviousWe have UX, DX, CX and EX, how about MX?
NextThe number one starting point to be a powerful social leaderNext