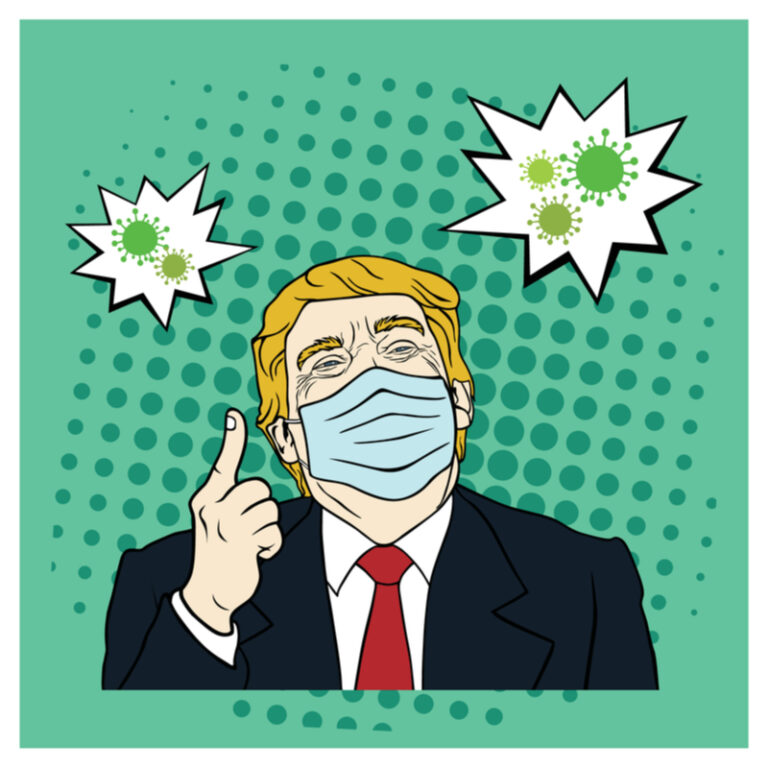 What a week in the news!! First we have Trump’s tax returns; then Brad Parscale has a meltdown; followed by a shambolic first debate with Joe Biden, moderated by Fox’s Chris Wallace; Kimberly Guilfoyle’s (Don Jr’s girlfriend) story is beginning to get the attention it deserves; Melania becomes the enemy of Christmas; The Proud Boys start making call-to-arms videos, a study reveals Donald Trump is the single biggest source of coronavirus misinformation in the world; Hope Hicks tests positive for COVID19; and then, Donald and Melania Trump are confirmed to have the virus.

And that’s just news around the US President. There is a lot going on elsewhere in the world too, but I want to focus on the last 24 hours of this particular news cycle as an example of how appalling it is today, and how we all contribute to it.

When the news broke of Donald Trump’s virus confirmation, we had a short period of time where we could be the first to let our community know this breaking story. After that, it was just the same news being shared millions of times. It’s natural to want to share such a breaking story – because it’s a massive story – but once it’s out, it’s out.

My advice on the next step in a news cycle like this is, step back and watch the news across multiple sources, and get to the bottom of what is really going on – because that is what’s important. The truth. Hard to achieve in our world today.

For all of us, who want to be responsible knowledge sharers, it’s critical to understand that in a situation like this, it will take days and weeks to know the magnitude of this story. The President is in a high risk category, and the fall-out if he gets seriously ill will ripple around the world. It’s a case of watch this space carefully.

But we don’t do that anymore, do we? We engage in conspiracy theories. It’s hard not to, right? Is it the October surprise? Will he come back in two weeks and say it was just a small flu? Will he declare Hydroxychloroquine saved him? Or perhaps the new vaccine is tested on him and it works, meaning it won’t go through the approval stages required for vaccines? Will he take the Russian vaccine? Will he get it bad? Will he die? Is it a hoax? Is he trying to get out of further debates with Joe Biden? Is this a ploy to get out of the Presidential job?

And on it goes, just a few of the thoughts and ideas I’ve seen racing around on Facebook, Twitter and the other social channels I follow. Let’s exercise caution. Let’s also act with dignity. There is a lot of vitriol being circulated and while fully appreciating many people’s deep anger towards this man – hospital workers, people who have lost loved ones, and more – when we speak with hatred towards others, it only hurts ourselves.

I hope for a world where we can reclaim speaking with compassion always, because that is the path towards healing the world. I do not like Donald Trump, but I do not wish him ill, I just want to see him out of the White House. When I speak ill towards another, I sacrifice a part of me. I do not hate. I can not hate. Hate is the problem we are dealing with in the world, and if we want to change the direction we are all heading in, focusing on our words, thoughts and feelings is a great place to start. Just my thoughts on this, not diminishing anyone who is feeling outraged today. I understand your outrage too.

If there is one person worth following for daily commentary on US politics, it is political historian Heather Cox Richardson. Always balanced and you can subscribe to her daily email if you’re not on Facebook.

In the last week, we’ve seen new airlines offering flights to nowhere (appalling practice, completely oblivious to the environmental impact), and we’ve seen Singapore Airlines (who decided not to do flights to nowhere) post that they will be offering first class meals delivered to your home, costing just under $500. I totally get SIA needing to earn money, but my friends, if you can afford to spend $500 on a meal like this – and no judgement on anyone who does – please consider donating to UN Refugee Program and World Food Program? A $500 donation could feed 50 families for two weeks. Let’s take care of each other.

United We Can – A Reflection on the Theme – a beautiful post from my friend Samantha Gayfer. This was an intense experience for the community, but the result has been so heart-warming.

China’s Pledge to Be Carbon Neutral by 2060: What It Means

United in Science report: Climate change has not stopped for COVID19

What is the circular economy? tks Wendi Stewart

The #CarbonLaw – A roadmap for rapid decarbonisation – tks Susanna Hasenoehrl

Covid: What is the risk to Donald Trump’s health?

As A Doctor, Here’s The First Thing I Thought When I Found Out Trump Has COVID-19 – tks Angela Frechette

Liberals Ask: Why Should We Believe Trump Has the Virus?

Trump is reportedly experiencing ‘cold-like symptoms’ and has appeared ‘lethargic’

Coronavirus: Students ‘scared and confused’ as halls lock down

The United States Is Not Entitled to Lead the World

Why are Armenia and Azerbaijan fighting and what are the implications?

Revealed: Trump campaign strategy to deter millions of Black Americans from voting in 2016

Statement From The Premier

For years, Mark Zuckerberg has faced criticism that Facebook is bad for democracy.

Time for digital to be heart of economic recovery

Mass layoffs and smaller airlines loom after COVID-19, even with more aid

Noam Chomsky: The world is at the most dangerous moment in human history tks Dominic Powers

The Secret History of Kimberly Guilfoyle’s Departure from Fox tks Gina Giachetti – this is a story gaining more attention.

With rising unemployment, Ministers should look beyond work-related paths out of crime – to families

Helen Reddy died this week. An Australian icon, this song never made it around the world, but it’s a magnificent song. RIP and here is: I Am Woman (1971)

Like I said, crazy week, huh? Let jumped out at you?

PrevPreviousIf you don’t like social media, here’s three things you can do about it
Next#23 Weekend reads – a fly and women’s extra mileNext